This is my inaugural blog about “Depression Survival.” It’s not intended to replace any medical advice from heath practitioners. “Depression Survival” is based on my experience as one who was physically and emotionally abused as a child and on my education and forty-year career as a physical therapist.

Both of my parents were alcoholics and Mom was mentally ill. As a child I was whipped from both ends of my dad’s belt. I was kicked with steel-toed boots, punched and slapped – often several times a week. There was no emotional support, protection or love from my mother.

I was locked away for over sixteen hours in a darkened, hot area of our house with only cockroaches and spiders to keep me company. I sat on wooden steps above a dirt floor. The stairs once led to the outside from the cellar of our 150 year-old home. The top of my tomb had been cemented over years prior. Dad locked the door and left me abandoned in total darkness. That was the day my childhood ended. I was about eight-years old. The full story is in my book, “The Shade Tree Choir.”

My childhood consisted of learning to survive – physically and emotionally. The constant state of tension and anxiety probably led to my lifelong depression. But, I am a survivor. Hence the name of this blog – “Depression Survival.”

I have lived with clinical depression for decades and, like many others, have been fortunate in business, in my career and in my personal life. I know one never outgrows the disease and that waves may hit at any moment. I will share with you what I do to try to keep those waves away and what I do when they splash upon me.

In upcoming issues I shall address what I consider four components to “Depression Survival.” These include physical, emotional, spiritual and social needs. You will learn my coping skills in each of these four puzzle pieces.

Our journey together begins here. It’s the prologue from my book “The Shade Tree Choir.”

“I struggled for air and could only whimper for him to stop hurting me. I could feel my ribs being crushed against the floor by his heavy weight on my upper back. The sheer force of his hand stung my wrist as he pulled my arm behind my back and yanked it sharply upward. I thought he was going to break it off. The shag carpet ground against my face like sandpaper and I could feel the tearing of my skin. My nose pushed into the fibers and I could barely breathe through the burning sensation of pain. I gagged at the smell of the filthy tattered carpet, at the stench of a decade’s worth of dog waste and urine. As I struggled weakly against his grip, I choked on the odor of unwashed feet, mud, grime, and ground-in food. My stomach heaved at the sickly scent of bourbon and beer and hopelessly, my tears and sweat mingled into the carpet beneath me.

Why was my dad doing this awful thing to me? What had I done to deserve such treatment?

I was eight years old.”

For some sixty years since that beating described above, I have analyzed, synthesized and realized that I have control. I have grown in life and I have succeeded. I remain vigilant to the disease.

My dad also grew along the way. As reported in “The Shade Tree Choir”, one night after a confrontation with one of my younger brothers, he apparently poured the remaining Jim Beam down the drain and told Mom that it all ends now. They stopped drinking at that instant and as long as he lived he never had another drop to drink. Neither did my mother. I had long before left the house when that happened.

Dad read books about positive thinking; he consciously changed his behavior and became a different man. In that cellar where I was entombed in the stairwell, where I was beaten hundreds of times, he taught himself to paint. He remolded the area including new lights and a sound system that played classical music while he painted. I suspect he found his soul centered with his artwork. His works were impressive. When he died at a young age of fifty-three years I was given three of his paintings.

Six months ago I stumbled onto a You Tube video about drawing a tree. For an unknown reason, it caught my eye and I started drawing different scenes after that original tree. Part of my constant effort to keep depression at bay is to learn new hobbies. Like my dad, I have learned how to draw using a variety of mediums. I am in the process of developing a coffee table book displaying my new passion. Hobbies can be a method to combat depression. One can become focused and negative thinking disappears.

Recently my older brother presented me with a gift. It was Dad’s box of art tools and supplies. My brother was given these memories when Dad died. I opened that box and floated my fingers across the paints of many colors. I reflected on the days his hand dropped the belt and grasped the brush. That box has travelled far from the place where I was tortured as a kid to where it now now sits next to me as an old man.

Days when my soul is centered far outnumber negative times of turmoil. Art gives me peace, as do many other activities. I smile thinking of the irony between my dad and me. I shall fill his empty easel with own colorful blends. Forgiveness allows that to happen. 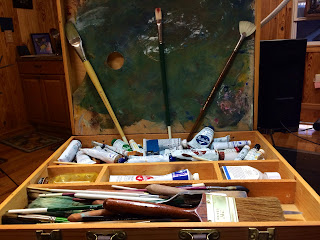 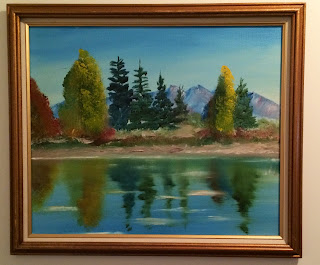 One of Dad’s paintings 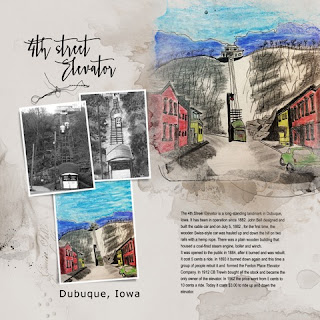 One of my drawings

Be sure to visit my web site at www.davidnelsonauthor.com

Thank you for commenting on my blog!

A story of child abuse from alcoholic parents